In Ancient Greece, the agora was an open assembly space for great minds—a hub for art, politics and religion. In English, the term still has lofty undertones. In modern Greece, however, the word has come to indicate an actual marketplace. The term laiki agora, or just plain laiki, means ‘people’s market.’ Bringing affordable fresh produce from farm to city, these lively fruit and vegetable markets feature both sellers and producers. Not quite what the Ancient Greeks had in mind, but still delicious.

There’s a novelty factor in terms of how the laiki operates. With the exception of the two central markets—the one just below Athinas Street and the Central Market of Renti, which is mostly wholesale—the laiki are not fixed in one place, but pop up in different neighbourhoods (and sometimes on different streets) once a week.

For a few hours every week, regular streets are completely transformed. Starting at dawn, benches, counters and canopies are assembled on the spot and filled with seasonal, regional produce. Fruits and vegetables, eggs, flowers and plants, and about a billion different varieties of olives almost spill off the colourful counters. Sellers try to peddle their goods by shouting witty one-liners such as “This is a not a stall, this is a boutique.” Or: “My dad just left, I’m giving everything away!” Around 3 pm, everything is disassembled and the street goes back to normal for another week. 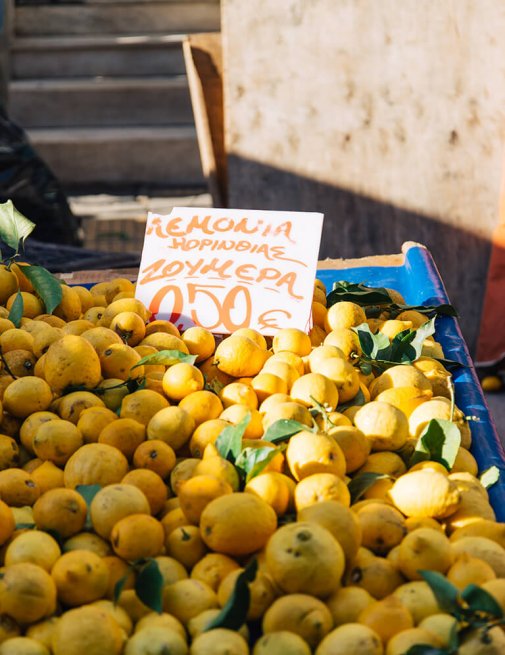 Going to the laiki is very much a regular habit for Greeks, who are used to buying and cooking seasonal food. In Athens and Piraeus alone, there are currently about 195 different laiki markets. Every neighbourhood has at least one market per week. The produce has evolved along with Athenians’ spending and eating habits. Following the financial crisis, the occasional outliers selling strange, cut-price stuff (everything from Chinese underwear with obscure slogans to bizarre kitchen gadgets) have multiplied, as consumers are looking for cheap deals anywhere. The trend for organic goods has also had an impact: 25 of the 190 laiki markets are now strictly organic. 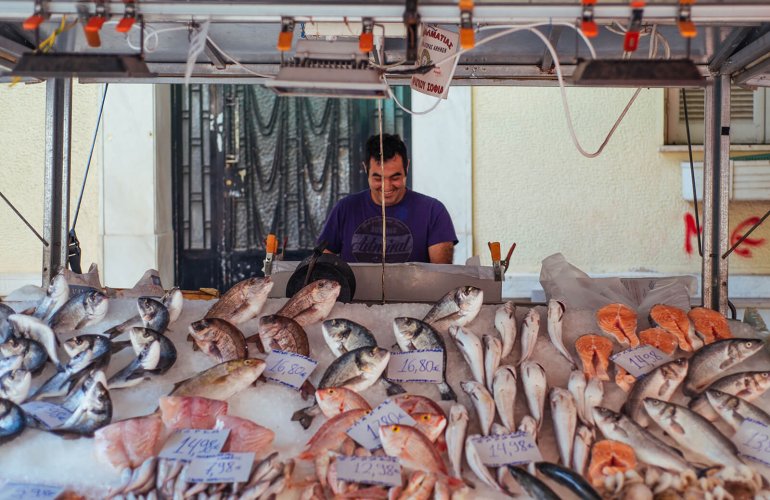 The laiki is a great place for some fishy business.

Straight from the soil to you.

From Exarchia to Kifissia: Where to Buy Seasonal Ingredients

Unlike the central Varvakios fish and meat market, which has recently been discovered by tourists, the laiki remains an untapped treasure. The only exception appears to be the laiki held every Saturday on Kallidromiou Street in the restless Exarchia neighbourhood, which now has a few foreign visitors.

The setting is beautiful: Kallidromiou Street runs beneath the green hill of Strefi and is home to some of the of the prettiest buildings in Athens all in different architectural styles, from neoclassical to Bauhaus. There is a dedicated mushroom bench here. Fotis, the seller, will guide you through how to eat and cook every single mushroom variety. In the summer, there is an awesome watermelon stand, which is usually at the intersection of Kallidromiou and Zoodochou Pigis Streets. 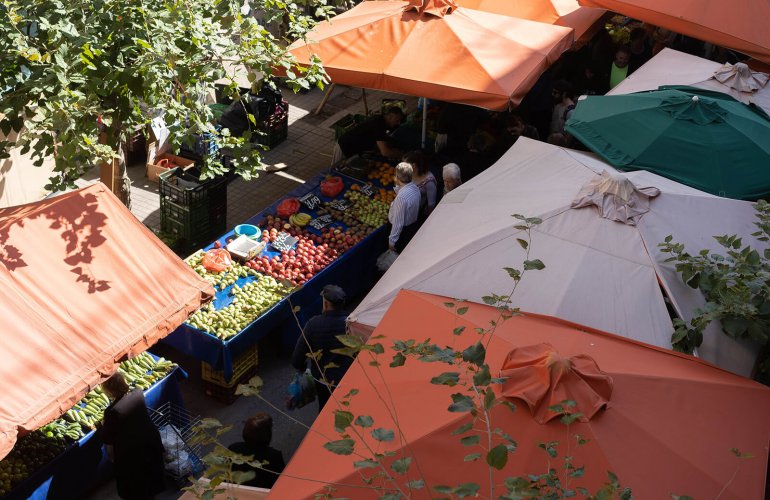 Discover the photogenic charms of the Kallidromiou Farmer's Market.

The street also has a brilliant butcher Yiannis, who plays rock music, a good bakery, as well as three adjacent places that are open for coffee (Bourbon, Paraskinio and Erodios) at that time, so it’s an ideal Saturday stroll.

A greener option is the organic farmers’ market on Kokkinara Street in Kifissia, a leafy northern suburb of Athens. Apart from fruits and vegetables, there are fantastic goods from small producers all over Greece. Look for grains, such as black dried beans from Prespes in Northern Greece, honey and pasteli (a Greek energy bar made with honey and sesame seeds) from Kalamata, and the greenest, purest extra virgin olive oil from various parts of Greece. 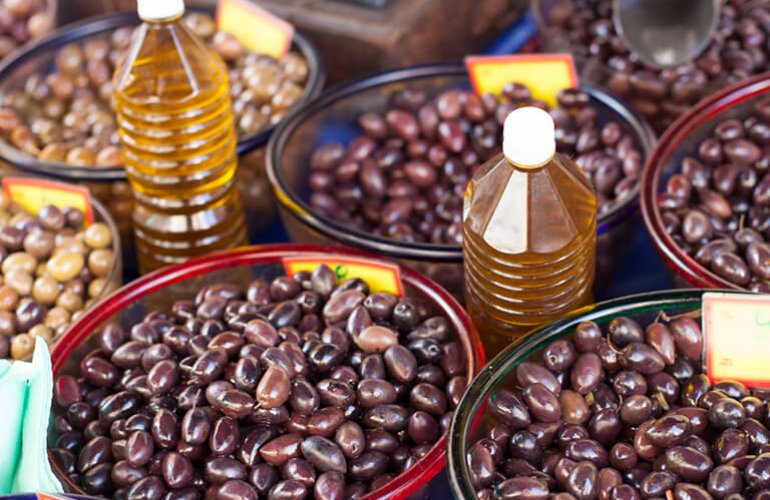 Whether you grab a handful or a giant tub, you'll be back for more Kalamata olives.

Life is peachy at the laiki.

It’s hard to leave any laiki without being laden with a whole trolley heaving with fresh produce. Be sure to try these seasonal delights. 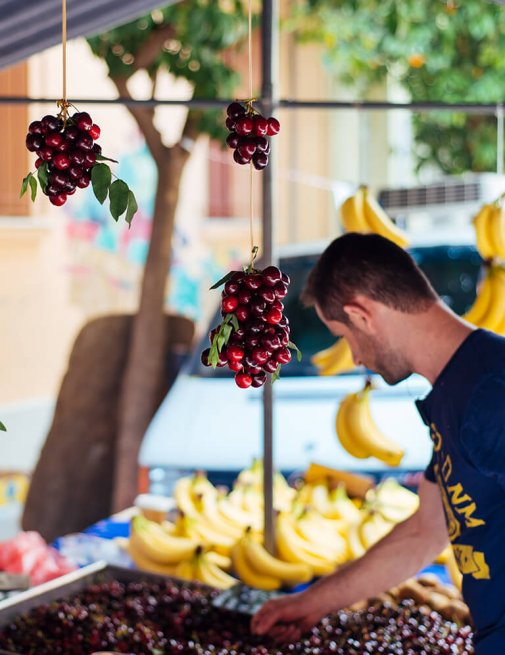 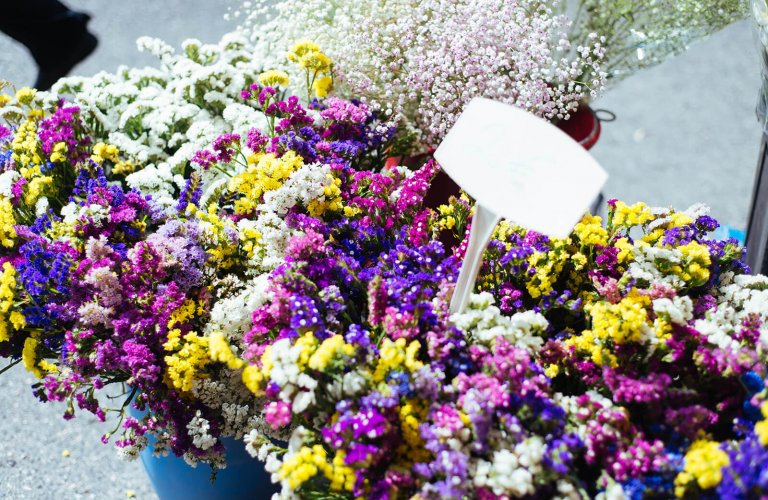 Brighten up your hotel room with a bunch of dried flowers from the hills of Athens. 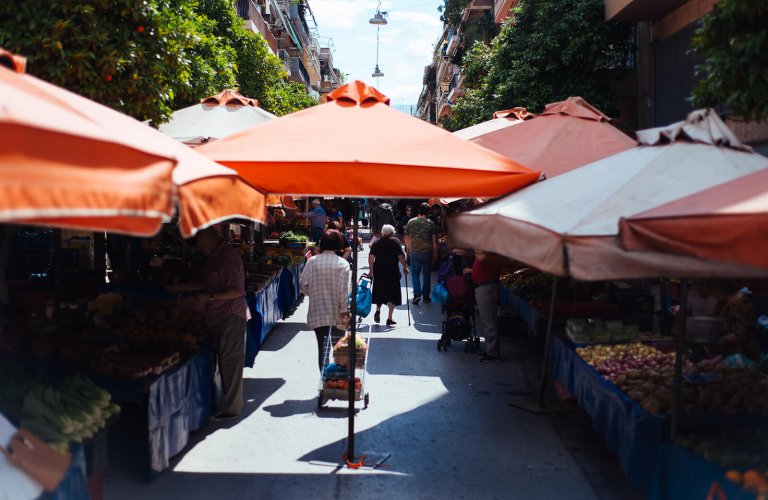 Fill up your tote with fresh Greek goodness at the Kallidromiou Street Market. 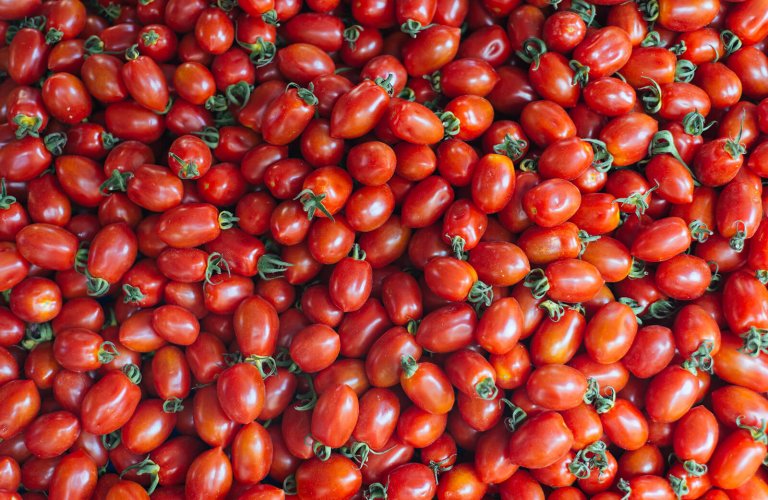 They taste even sweeter than they look.

Where to find your local laiki 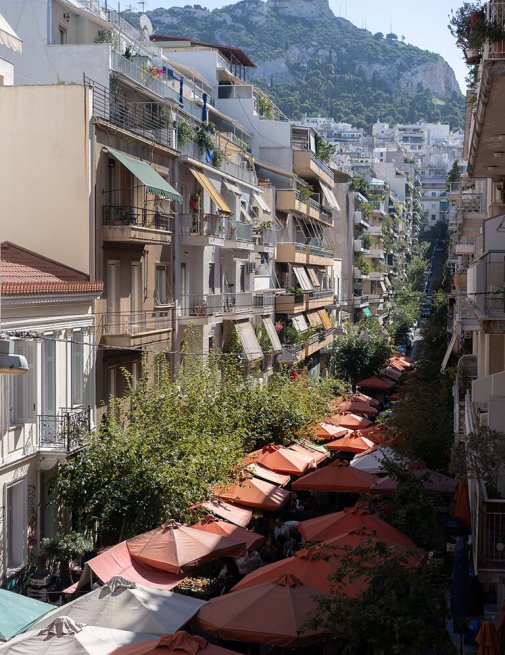